Since 9/11, Islamophobia has been 'a constant feature' in Canada, experts say

Soon after the terrorist attacks in the United States on Sept. 11, 2001, Sunera Thobani says she started receiving death threats.

The professor in the department of Asian studies at the University of British Columbia is Muslim, and was outspoken at the time against the impending war in Afghanistan that kicked off the decades-long war on terror. That made her a prime target of Islamophobia, which spiked across much of the western world in the wake of the attacks, including in Canada.

“People showed up at my workplace and you could see they had signed petitions, and they sent them to the president’s office trying to get me fired,” she said.

“It never really went away. Those kinds of attacks, this hatred of Muslims, it has been a constant feature of Canadian political life in the period since 9/11.”

Read more:
What is the government doing about Islamophobia in Canada? Here’s what we know

Statistics and surveys show that reported hate crimes against Muslims surged in Canada after 2001, along with negative attitudes toward those of Islamic faith. And while the number of reports ebbed and flowed over the past 20 years, it never went back down to pre-9/11 levels.

“There’s always what I’m going to call a ‘flavour of the month’ when it comes to who’s being targeted” by hate crimes and abuse, said Evan Balgord, executive director of the Canadian Anti-Hate Network.

“Whether it’s the Wet’suwet’en blockades that sparked a wave of Indigenous abuse, or the Black Lives Matter protests that led to lots of anti-Black racism. But it always returns back to Muslims and Islamophobia.”

The ‘war on terror’ years

A 2003 report from the Canadian Islamic Congress cited by researchers showed how quickly anti-Muslim hate crimes increased just a year after the 9/11 attacks.

“There was a real feeling that the terrorists were everywhere,” Thobani said. “That was prevalent throughout the West, including in Canada.”

The attacks plunged Canada into a heightened security posture. Airspace over the country was closed for days afterward and the federal government moved quickly to pass the Canadian Anti-Terrorism Act.

The next year, Canada joined an international coalition led by the U.S. that sent troops into Afghanistan to overthrow and destroy the al-Qaeda terrorist group and the ruling Taliban regime. A majority of Canadians at the time supported their military’s involvement, though not as broadly as Americans did.

Thobani says anti-Muslim sentiment was also fuelled partly by the very justifications used by the U.S. and Canadian governments to invade Afghanistan: to free Afghan women and girls from the oppressive rule of the Taliban.

“What we saw at that moment is that Islamophobia became a gendered discourse,” she said. “It fuelled perceptions about (male) Muslims, but it also othered Muslim women and girls too. And that othering, it never stopped. That gap has been growing even larger since 9/11.”

In 2002, the Canadian Council on American Islamic Relations — now the National Council of Canadian Muslims (NCCM) — found nearly two-thirds of Canadian Muslims it surveyed had experienced “bias or discrimination” in the year since the 9/11 attacks. One-third told the group that their lives had gotten worse since that day, and felt Canadians disliked them.

“It’s become systemic since then,” said Fatema Abdalla, communications coordinator for the NCCM. “And what we’re seeing now is that not only is it growing, but it’s also evolving.”

Statistics Canada data on police-reported hate crimes between 2009 and 2020 — the most complete data available — shows a slow but steady increase of anti-Muslim incidents across Canada for the first half of the 2010s, from 36 reports in 2009 to 99 in 2014. 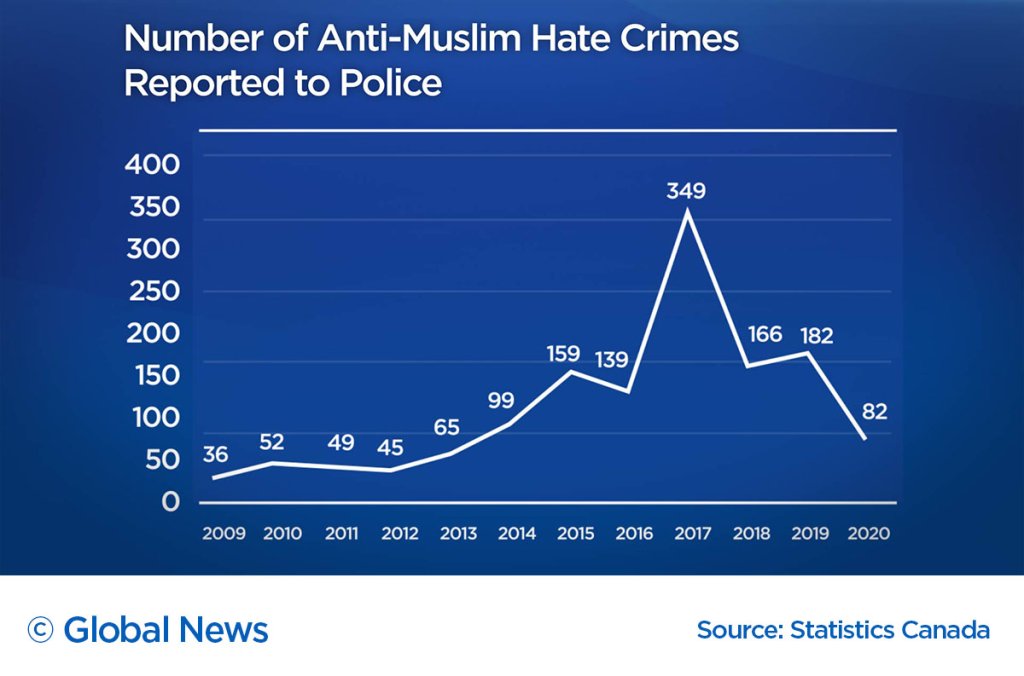 During that time, Balgord with the Canadian Anti-Hate Network says the seeds of the modern Islamophobic movement were being sown.

“The first real rallying cry was the opposition to Motion 103,” he said, referring to the non-binding motion in Parliament denouncing Islamophobia that was introduced in late 2016 and passed the following year.

“Everything we’ve sort of seen since then has grown out of that: the anti-government, anti-leftist elite opposition that evolved into the Yellow Vests and all these activist groups … that are based, when it comes to the racist right, in anti-Muslim hate.”

Balgord also points to other flashpoints like the Stephen Harper-led Conservative government vowing to establish a “barbaric cultural practices hotline” during the 2015 election, which was criticized for feeding anti-Islamic sentiment. That move followed the 2013 Quebec Charter of Values that limited public sector workers from wearing religious symbols like hijabs.

“The prevailing narrative of all this sentiment was this vast conspiracy, that Muslims were trying to infiltrate and take over the West and commit a white genocide, or at least change the culture,” Balgord said. “And some politicians fed into that.”

The mid-2010s also saw some of the worst attacks on Muslims and their places of worship in Canada’s history: the attack on Muslim students at Queen’s University in 2014; the Peterborough, Ont., mosque arson in 2015.

It all culminated in the 2017 shooting at the Islamic Cultural Centre in Quebec City, where six Muslims were killed and 19 more were injured.

Throughout this period, Muslim women — a visible target due to the wearing of hijabs or niqabs — were attacked in cities across the country, with many attackers tearing off or attempting to remove the victims’ headscarves.

Abdalla with the NCCM says the rise of social media has allowed hate groups to form, grow and plot attacks much more easily while radicalizing new recruits, helping to explain the more recent rise in hate crimes.

“That’s why we’ve called for action against online hate, particularly when we found that social media and online forums were key motivators for the Quebec City mosque shooting,” she said. “And we’ve seen some progress, but it’s even more critical now.”

The most recent data from Statistics Canada shows that police-reported crimes against Muslims have fallen slightly over the past three years, coinciding with a wave of outreach and awareness after the attacks of the mid-2010s. However, they remain far higher than the early post-9/11 era.

On average, over 140 incidents were reported each year between 2018 and 2020. Last year marked the lowest number since 2013 with 82 reported hate crimes, despite hate crimes overall increasing during the COVID-19 pandemic.

A spree of attacks on Muslim women has been reported in cities like Edmonton, while mosques are still being threatened. Last week, a Langley, B.C., mosque received a letter threatening a mass shooting similar to the one in Christchurch, New Zealand, which killed 51 Muslim worshippers in 2019.

The sustained level of anti-Muslim crimes was brought into stark relief this past June, when four family members — including a 15-year-old daughter — were hit by a truck in London, Ont. Police later said the victims were targeted because of their Islamic faith.

While the summit led to promises by the Canadian government — including tackling online hate and more outreach and education — experts say more needs to be done.

“These are Band-Aid solutions,” said Thobani, the University of British Columbia professor.

She says now, with the U.S. withdrawal from Afghanistan sending refugees to Canada, is the time for reflection and change.

“Until we have an honest reckoning about why we went to war in Afghanistan, how our heightened border policies are aligned with anti-immigrant sentiment, we will still see these kinds of attacks and threats,” she said.

“It’s all tied back to the war on terror.”