IN LIGHT OF THE ONGOING PROVINCIAL RESTRICTIONS DUE TO
THE COVID-19 PANDEMIC,
JUST FOR LAUGHS VANCOUVER
IS POSTPONING THEIR UPCOMING 2022 FESTIVAL

VANCOUVER, January 21 2022 – In light of the recent announcement issued by the Government of British Columbia, Just For Laughs VANCOUVER has come to the difficult decision to postpone this year’s festival, scheduled to take place from February 15 through 27, 2022. Unfortunately, given the scope and size of the Festival, operating at 50% capacity in most venues is not a plausible option. Details regarding the rescheduling of this year’s festival, will be provided in the coming weeks. With the goal to maintain as much of the announced lineup as possible, the Festival encourages patrons to hold onto their tickets as further information regarding the new dates, and confirmed talent performing will be announced in the coming weeks. We are looking forward to gathering and enjoying premium live comedy all together in the near future. As of now, the special concert show, Trevor Noah: Back To Abnormal World Tour, set to take place at the Rogers Arena on Saturday, February 26 2022, will be moving forward as scheduled with the provincial guidelines of reduced capacity. Further information will be provided in the coming weeks “Providing an opportunity to gather together to share big laughs is what Just For Laughs VANCOUVER does best”, adds Heather Wallace, Festival Director. “We are grateful for our festival sponsors, venues, staff and artists who are a huge support in helping to make sure we’re back in 2022. We appreciate ticket purchasers’ patience while we work towards rescheduling as many shows as possible.

Just For Laughs VANCOUVER in association with SiriusXM
FEBRUARY 15-27, 2022

With the city of Vancouver and their devoted comedy enthusiasts being such an essential contributor in the festival’s resounding successful history, it was only fitting that the city is represented internationally in its name, and has now been officially incorporated into the festival title. Just For Laughs VANCOUVER producers are excited to bring back this beloved festival to the city, and are working tirelessly to curate performances by some of the largest names in comedy right now, ensuring that fans and attendees are offered the best comedy experience possible. 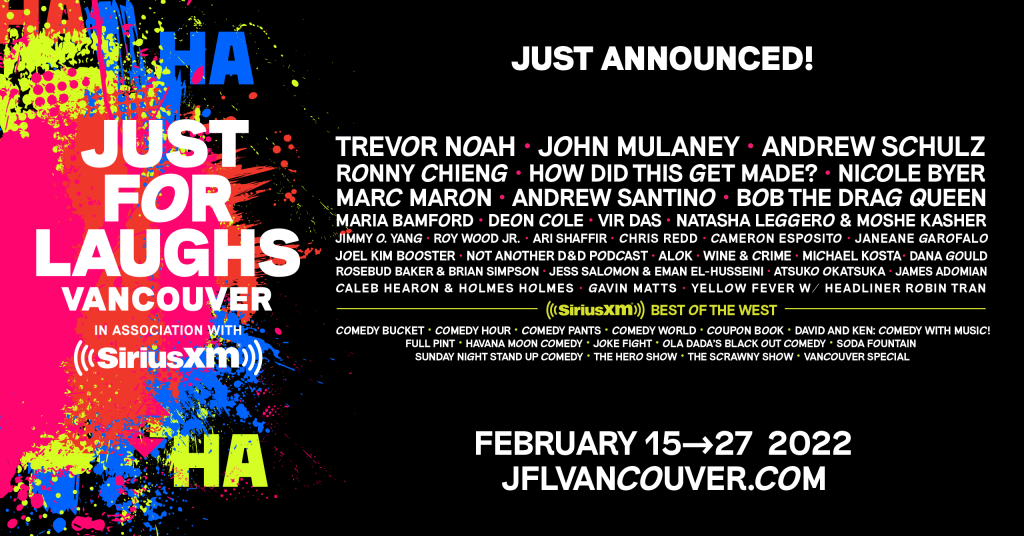